Fruit Salad: Catholicism and Taoism on Being and God 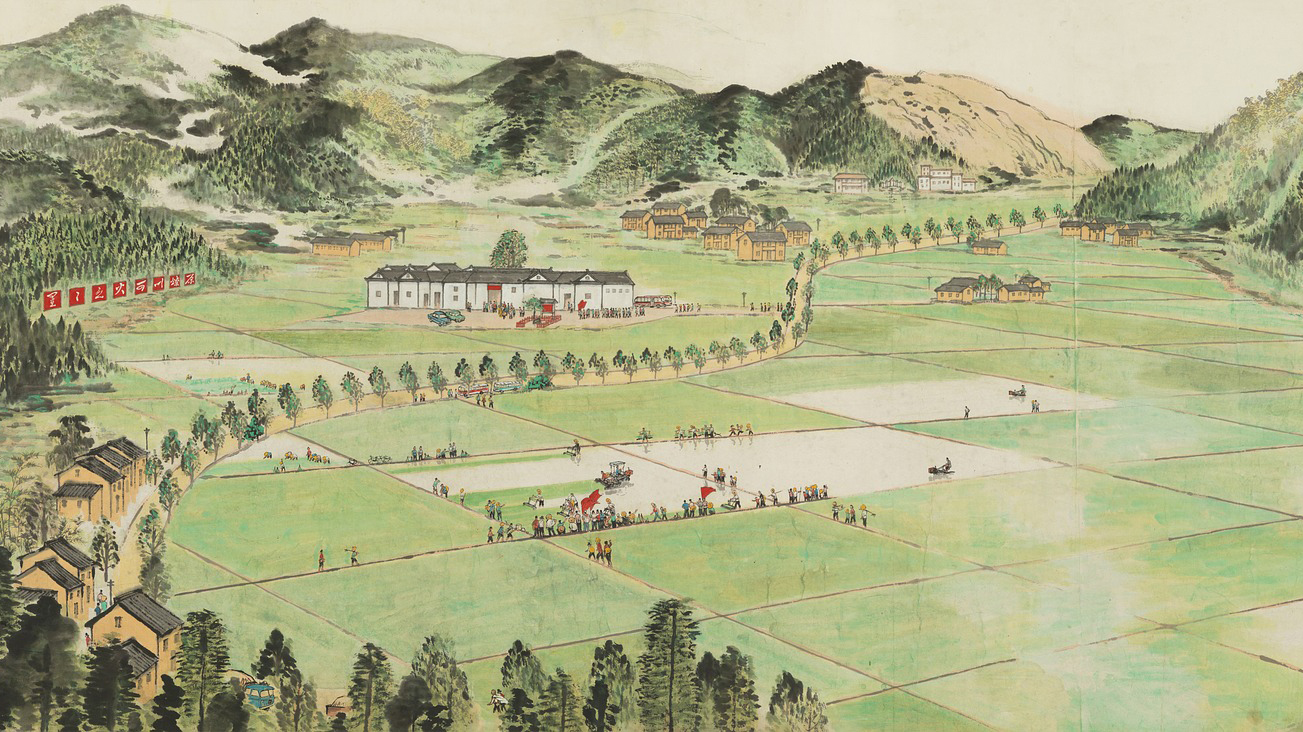 When I was travelling in England, I attended a Buddhist-inspired retreat for a week at the Sharpham Retreat centre in Dartmoor. A re-fitted barn from the 1960s was our home for the week. It was perched halfway up a hill on acres of farmland overlooking the River Dart which runs south toward the Atlantic.

The centre was a quiet, welcoming place. In the kitchen there was a corkboard that had post-it notes from Rumi, that great Sufi poet whom few would associate with the Islam as brought to you by the iOS News app. Not that we had access to the news; it was advised that we leave technology aside for the week. I had no qualms about that; I was glad for the time to disconnect both geographically and technologically from my life in Melbourne. It had been a roller coaster of a year up till that point with the end of my undergraduate studies and a death in the family.

It was at the retreat that I began seriously reflecting on the Western philosophy of my own heritage, and its interaction with the Eastern belief systems of Buddhism and Taoism. In this article I’ll address the foundational concepts of Being and God in Catholicism and Taoism. This is no small feat, but I aim here to present the beginning of a dialog.

East and West, Apples and Oranges

We were visited at the retreat by practitioners and teachers of Buddhism from various schools and sub-traditions. I recall a specific session with a teacher whose name I can’t remember, but we will call her Ellis. She told us a story of a Catholic priest, who was also a great scholar of Buddhism. I would later learn that his name was Étienne Lamotte.

She spoke of how Lamotte was the pre-eminent scholar of Buddhism in the West during his lifetime. He was equally dedicated to two religious traditions: to Catholicism by vocation, and to Buddhism by academic profession. He stressed the understanding of concepts within each tradition, and he avoided the syncretistic tendencies of inter-religious dialogue that characterised his time. That is to say, he shied away from combining different religions or schools of thought into one system, as each tradition had a different historical, geographical and social basis.

Ellis opined that, given his deep knowledge of two traditions, it is conceivable that had Lamotte been born in a majority Buddhist country like Thailand, he would have instead been a scholar of Catholicism and a practitioner of Buddhism.

I was immediately curious, perhaps sceptical, about this statement. It seemed to imply that our beliefs about fundamental reality can be reduced to accidents of geography. Certainly, traditions arise in different places and times, but that does not mean there couldn’t be a common truth, perhaps aligning itself with one tradition, or parts of one, or to something else entirely.

After the session, I asked Ellis how one person so steeped in two traditions would conceive of God.

She told me that they have “different bases” and that “we all have our language and ways of framing things. Certain concepts are not equivalent. It’s like apples and oranges.”

The challenge presented in this conversation had a particular resonance for me at the time. I had arrived at the retreat after a spontaneous three-hour conversation about God, the Trinity, history and science with a theologian on a thoroughly delayed train. At the time I was also reading the Tao Te Ching, the central text of Taoism. Taoism is the classical Chinese belief system which, among other things, focusses on nature, harmony and balance. I had been exploring centuries-old ideas about life and creation through the Western and the Eastern minds, or through, as it were, “apples and oranges.”

The phrase “apples and oranges” is used quite a lot, as if two ideas are completely different, but really, can’t apples and oranges go well together sometimes? Imagine making a smoothie, or sitting down to a nice fruit salad in the summer. And don’t they actually share some common characteristics? They’re both fruits. They both have seeds. They both grow on trees. In fact, one species of fruit may even be grafted onto another tree.

I’d like now to run with that metaphor, and attempt to make something of a “fruit salad” using the Catholic and Taoist understandings about God and Being.

Each tradition interprets these ideas differently, although there are some similarities. What options do we have when reading about and discussing a clash of metaphysical claims? Either one or none of them is true, or they both hint at something true but do not embody it completely, but they can’t both be true. I was afraid that the invocation of apples and oranges would stray into this last option.

While I grew up Catholic, one of the experiences that recently re-engaged my interest in the faith was reading an apologetic book called Answering Atheism by Trent Horn. Horn presents classical arguments for God’s existence and its implications for human life. An argument that is particularly popular, in large part due to the work of philosopher and evangelist William Lane Craig, is the cosmological argument.

Many objections and clarifications are often raised in response to this argument. Some say that the universe could cause itself, or that the universe doesn’t prove that God is the First Cause, or that a supernatural First Cause is personal, or good. I cannot address those concerns in the space of this article.

However, I do want to emphasise that the Catholic interpretation of these arguments is that the First Cause, being responsible for and beyond the restrictions of space-time, must then be immaterial and eternal. These are two properties often associated with God.

Horn goes on to suggest, like Saint Thomas Aquinas and others in the tradition, that God as First Cause can be likened to the “ground of being” or “perfect, limitless being.” God is the one who creates and sustains the universe. Furthermore, if the universe began to exist, it cannot arise simply out of another force. It must be an act of creativity, and of will, and therefore the act of an Intelligence, or a person. The buck stops with Him, he is the Absolute.

Taoist cosmology posits that the Tao is the source of creation. Often translated as “Way” or “Path”, the Tao is not an intelligent Person that directs and sustains the universe, as in Catholicism. It is rather an eternal state of potentiality in which all beings in the Universe find their root, and to which all beings return.

This is because ultimately, all beings are impermanent; they’re just passing through, changing into other beings, carried along by the vital energy of the Tao. I find Hamlet’s graveyard reflection on the fate of Alexander the Great to be an apt and haunting illustration of this viewpoint:

“Alexander died, Alexander was buried, Alexander returneth to dust, the dust is earth, of earth we make loam, and why of that loam whereto he was converted might they not stop a beer-barrel?” (Act 5, Scene 1, 177-179)

Yet the Taoists would likely advise Hamlet to loosen up. By understanding that one’s Being ultimately arose from and participates in the vital flow of the Tao, in the balance between life and death, being and nonbeing, one reaches a state of supreme acceptance and tranquillity. But why does the Tao even exist at all? Why does it have to be this way?

Lao-tzŭ, the much-disputed author of the Tao Te Ching, wonders this very thing:

Tao functions through its nothingness. And can not be conceived of as full of things. Profound indeed, it is the model of all things. Dulling its sharpness, Releasing its entanglements, Tempering its light, and Unifying with the earth, Clearly, indeed, it remains. I do not know who created it, But it is likely that it existed prior to God. (Chapter 4)

This passage seems to suggest that the Tao is the natural order or model of Being, the Absolute about which it may not make sense to ask: “who created it?” If it is beyond Being, then it may be beyond space and time, or be eternal. This is why it is often conceived of as Non-being. Perhaps it is akin to the state of the world “before” the creation by God.

And God is still present here in the Taoist cosmology, although the Tao seems more fundamental. What then, or who, is God? Toshihiko Izutsu, scholar of comparative philosophy of religion, reflects on this as follows:

In the world view of Chuang-Tzŭ [another Taoist sage], the Absolute or the Way has two different aspects, cosmic and personal. In its cosmic aspect the Absolute is Nature, a vital energy of Being which pervades all and makes them exist, grow, decay, and ultimately brings them back to the original source, while in its personal aspect it is God, the Creator of Heaven and Earth, the Lord of all things and events.”

Perhaps the personal aspect of the Absolute is a manifestation of the way we, as human persons, understand it. We see the personal because we are persons. This may fit with Lao-tzŭ’s musing that the Tao existed prior to God, that is, it is more fundamental, more real.

Ok, it’s time to attempt the beginning of a fruit salad. I don’t think it’ll be a particularly juicy one. I’ve undoubtedly left lots of pith on the oranges, and some skin and apple seeds that will produce a tang of confusion.

Both Catholicism and Taoism posit that the world arose from a state much unlike what we currently experience. The world is also maintained in both worldviews by a supernatural force, the inexhaustible, Absolute Reality. The following table presents some similarities and differences.

Back to the Barn: What did I take away

Upon reflecting now, I hedge that the main difference between Catholicism and Taoism lies in how they conceive of the intelligibility and Personhood of the Creator. Flowing from this may be another difference, that in Catholicism we have personal, intelligent, immortal souls, while in Taoism we are immortal only insofar as we arise from and are subsumed in the Tao, which is immortal. These are topics for another day.

I hadn’t unpacked all of this when I was on the retreat. I wasn’t ensconced in my room, writing by warm lamplight into the night.

But I will leave you now with an image of my time there. On a day of silence, I went for a long walk among the meadows of the Dart Valley. Contrary to what I had expected of England, the weather for the week of the retreat was sublime.

I remember one particular meadow that was wide and steep; all I could see was the golden grass swaying intermittently above and beside me, while below was a forest and beyond that, the river. Within that forest badgers were at play, and a rickety cabin was strung up in a tree for watching them. A sheep meandered far in the field behind me. These were the only signs of life in the empty fields and the silent woods.

I felt in that moment that my life was fragile, constantly being “sustained”, and I was grateful. I was a pinprick of life too in that quiet landscape, a little being pondering the vastness and the nothingness in existence.

Below are some questions I have also pondered and which I hope to address in the future. I welcome comments with suggestions, clarifications, queries or stories!